Catching up with our Customers: Josh Edwards

Catching up with our Customers

New South Construction Supply launched “Catching up with our Customers” last month, a new monthly series where NSCS highlights our featured customer of the month on our newsletter, website and social media communities. Our second feature highlights NSCS customer Josh Edwards, Director of Pre-Construction at Edcon, Inc. We hope you enjoy this featured customer profile, and let us know if you want to be featured in upcoming months or have a nomination. 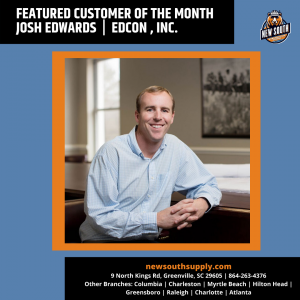 When you talk to Josh Edwards, Director of Pre-Construction at Edcon, Inc., you immediately sense the passion for the line of work he is in. Edcon, Inc., started by Josh’s father Eddie Edwards in 1988, has been at the forefront of the school construction industry for almost three decades, and they’re only getting started.

We recently interviewed Josh, and as you’ll read below in our New South Construction Supply (NSCS) Q&A, Josh and Edcon, Inc. are committed to education. The company’s line of work is 95 percent K-12 public schools, and teaching runs deep within his family’s blood. The company’s motto is “Inspired by Education”, and they truly live out that motto at work and at home, as numerous close family members are in education themselves.

Like New South Construction Supply, Josh and Edcon take immense pride in not just their work, but also in their commitment to their employees. Edcon isn’t your typical General Contractor, as Edcon employs 40 full-time employees,  many of which have been with the company since the early 1990’s. Customers and suppliers are equally as important, too. In our Q&A you will read about Josh’s relationship with NSCS’ Jon Black, a customer/supplier relationship that quickly turned into a decade of friendship. As close friends, Jon and Josh run marathons, compete in Ironman triathlons, and now trail run together. While most of us do not find that, well, fun, this shows both of their personalities — they are resilient, dedicated and enjoy pushing themselves emotionally and physically.

Tell us about yourself.

I live in Chapin, SC, where I also grew up. I went to Clemson University for college, and then moved back home and settled in the Midlands with my wife. We have three kids, and I absolutely love being a dad. Outside of work, I love coaching them with the sports they play, spending time on the lake, and when I get free time, I like to run, play tennis, golf, play basketball, and fish.

Tell us about Edcon and its services.

Edcon is located in a quaint little town called Peak, SC — it’s right on the Broad River just inside the Newberry County line. It’s an old railroad town and there are only about 64 people there, making it the fourth smallest incorporated area in the state. It’s really us, a doctor’s office, post office and a pharmacy. My dad [Eddie Edwards] started the business in 1988, and he bought an old general store in Peak to run the business out of. There’s a lot of hunting in the area, and I remember when I was a kid, the back part of our office was still used as a meat locker to store deer hanging upside down. When my dad started the business, it was just him and a superintendent, Frank Barnwell. Frank just retired about four years ago.

How did your dad get the idea for Edcon?

He was working for Martin Engineering at the time when he decided he wanted to go out on his own. When you start on your own, you take just about any project you can get, and over time, he slowly built up his book of business. At first, he did a lot of church renovations and over the years he started doing more school work, and he found he really liked it. Now in 2020, 95 percent of what we do is K-12 public schools, and our motto is “inspired by education”. We build schools, however we also live the life of education. Both of my grandmothers were teachers, my mom was a teacher, my sister is a teacher, my wife is in higher education at USC, and my brother’s wife is a teacher. We build schools during the day and discuss them when we’re home, so we feel we live out our motto.

How is Edcon different?

What many people may not know is we are still a true turnkey general contractor. We like to say that we take a project from “trees to keys” — meaning we take on a project from the time it is a wooded lot and until we are ready to hand the keys to the owner. We self-perform a lot of our work, as we take it from the ground-up and manage all facets to get the project done.

Tell us about some upcoming projects you have, and area areas where you’re seeing a lot of growth.

Edcon is currently in the middle of wrapping up three new elementary schools in Darlington County, where we started on them early last year. That county is seeing some growth. Another area with a lot of growth is Dorchester County, the Summerville, SC area. You’ve got Volvo on one side, and Boeing on the other,  and then all the people wanting to move to Charleston, so Summerville has taken off. It’s crazy, we are now on our sixth school project in Dorchester County. If you haven’t been to Summerville recently, it’s booming — everywhere you go, there is road work and growth.

Where are most Edcon projects?

We work all over the state of South Carolina, although we technically are licensed for North Carolina, too. For us, the work we do, the better it is when we are closer to home, as we prefer our employees to be home each night at home — that is important to us.

How many employees are at Edcon?

We have 40 full-time employees. Another thing people may not realize is we self-perform a lot of the work — our employees actually work in the field which eliminates our need to rely so heavily on subcontractors to do the work. A reason we have had a lot of success and why we can build the things we do is because our personnel are very strong in the field. We are lucky to have field laborers who have been with us almost 30 years now. Chemistry is so important with the guys in the field — nothing builds chemistry like longevity — those critical employees are just as important to us as our project managers are. We look at everyone as being on the same playing field , and we want our employees to stay here. For example, our controller Karen Summer has also been with us since 1991 and our Director of Project Management Bar Sease has been with us since 1992.

How long have you been with Edcon?

I first started working for Edcon in the field at age 14 in 1993. I was a 90 pound kid working in Columbia, SC in the 95 degree summer heat. The superintendent in charge of my first project, Roscoe Russell was a great superintendent and he took no pity on me. I spent that first summer (and many more) doing all of the jobs that no one else wanted to do. It was very intimidating at first but it toughened me up.  I did that field work all through high school and college and then officially joined as an assistant project manager in 2002 after I graduated. Doing that job [field laborer] gives you an immense appreciation for how hard our guys work.

Tell us about some other recent projects — any favorites?

We just found out we were awarded a new park project in Summerville. This will be the first real park for Dorchester County, right on the Ashley River. It has a big pond with four alligators, there will be dog parks, splash parks and so much more. It’s also something different for us and will be a fun project.

After I graduated from Clemson, one of the very first people I met working at Edcon was Jon Black. We hit it off really quickly, because we both realized we have a lot of common interests and both like endurance sports.

Almost everything that Edcon needs that New South Construction Supply sells, we buy from NSCS and that is because of Jon and Jim Sobeck. Jon is a great guy. Back in 2009, Jon talked me into running my first marathon. Then once that was over, he convinced me that I needed to do an Ironman, and I completed my first one in 2011. Jon, in addition to work, has become a really good friend. Now we do ultra marathons together, where we’ll run 40 mile trail runs in the mountains in the middle of February with snow and ice. One time, we ran two mile laps around a farm in Georgia for 24 hours — we’ll do stuff like that, and it’s a lot of fun. I also have great memories of going to the Clemson and Notre Dame game with Jon, where we left Chapin around 8:00 a.m. and got back at 2:00 a.m. That was the weekend of the floods here in SC.  It was an amazing football game, and we have had a lot of good experiences together.

In addition to Jon, Jim Sobeck does an awesome job taking care of people like me, his customers. I feel in some ways I am a part of the NSCS family as I know so many employees very well. I feel fortunate to work with NSCS and to attend events like The Heritage Golf Tournament with NSCS every year. You get to know other vendors, NSCS employees, and other friends and family members of NSCS. The entire team at NSCS makes customer service their highest priority and it really shows. I recommend NSCS to everyone!

Want to learn more? Josh can be reached at Josh@Edconinc.com, and you can learn more about Edcon by visiting their website at www.Edconinc.com.